From the earliest days, as he did with his hardscrabble Longhorn range cattle, Richard King relentlessly up bred the stallions and mares of the Wild Horse Desert whose descendants would become some of the finest Quarter Horses in the world.

The legendary Kineño vaqueros and many of Captain King’s descendants who have been devoted to the ranching life through the generations have made top quality horses a clear priority on King Ranch.

King Ranch’s Quarter Horse and Thoroughbred programs trace back to Richard King and his son-in-law, Robert Kleberg, Sr., who were constantly searching for better-blooded stallions to upgrade their horse stock. In 1915, Bob Kleberg (King’s grandson), bought OLD SORREL, a colt who became the foundation sire that made King Ranch famous as a breeder of champion Quarter Horses. Every horse on King Ranch is still descendant of OLD SORREL. View our current King Ranch Stallion Pedigrees.

Around the same time, Bob Kleberg also introduced King Ranch to the Sport of Kings. The Thoroughbred breeding program began producing results with victories in stakes races as early as 1936. Learn more about the racing program. 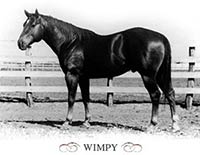 When the American Quarter Horse Association (AQHA) was founded in 1940, the founders agreed that the grand champion of the 1941 Fort Worth Fat Stock Show would be recorded as number one in their stud book. This honor went to King Ranch’s WIMPY, a grandson of OLD SORREL. 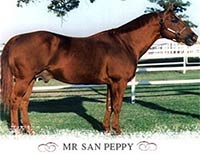 Besides being a two-time National Cutting Horse Association (NCHA) Open World Champion in 1974 and 1976, MR SAN PEPPY also won the AQHA World Cutting Championship in 1976, becoming the first horse ever to win both titles in the same year. King Ranch purchased MR SAN PEPPY under the guidance of its  Ranch Manager Stephen “Tío” Kleberg. MR SAN PEPPY was a son of LEO SAN out of a great-granddaughter of OLD SORREL named PEPPY BELLE.  In 1978, he became the first horse to ever win over $l00,000 in open cutting competition. The pinnacle of his career occurred in 1974, when he became the youngest horse ever to be inducted into the NCHA Hall of Fame. 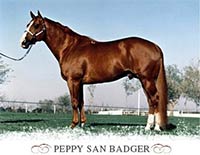 Among other honors, in 1977, PEPPY SAN BADGER won the NCHA Futurity. He followed that with a win in the NCHA Derby in 1978. In 1980, PEPPY SAN BADGER, nicknamed “Little Peppy,” was also inducted into the NCHA Hall of Fame. He topped off his victories by being named the 1980 Reserve World Champion and winning the Open Division of the 1981 NCHA Finals.  Little Peppy was originally purchased to demonstrate the siring ability of his father, MR SAN PEPPY. As time went on, Little Peppy’s impact arguably became even greater than his father’s impact on the sport of cutting and the quarter horse breed. Besides his accomplishments in cutting competition, Little Peppy was, until recently, the all-time leading sire of NCHA competition cutting horses. His offspring have won in excess of $26,000,000. Both of these outstanding performers were trained and shown by Buster Welch, another member of the AQHA Hall of Fame.

In 1983, King Ranch purchased DRY DOC to serve as an effective outcross for our traditional blood lines. Buster Welch had won the Futurity on him (defeating his son, Greg Welch, who was riding MR SAN PEPPY at the time). The bloodlines of King Ranch foundation and both of the Peppy’s were crossed on this son of DOC BAR and POCO LENA. In the late 1980s and early 1990s, King Ranch bred heavily to another stallion, CJ SUGAR.

With DRY DOC and CJ SUGAR, King Ranch continued to breed our strong bloodlines to what was performing in arenas, while still being effective for the number one goal: building and maintaining the perfect ranch horse.

Today, every horse on King Ranch is a descendant of OLD SORREL. They carry on the tradition, performance, and legacy of their predecessors. The bloodlines are still carried through the sires and mares breeding on King Ranch. Every horse on the Ranch goes back to MR SAN PEPPY or PEPPY SAN BADGER. King Ranch is continuing these bloodlines today and breeding a horse that can rope, cut, ride, and work in any terrain.