Brush continually encroaches onto grassland areas of King Ranch as a result of frequent and extended droughts, the cessation of fire, and the lack of grazing deferment. 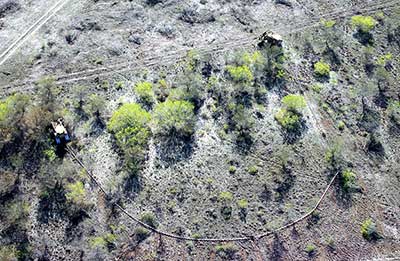 This ongoing brush encroachment has led to a gradual reduction in higher successional grasses and have slowly turned King Ranch from a “sea of grass” to a “sea of brush.”

From a cattle ranching standpoint, replacing grass with brush is detrimental because carrying capacity is reduced leading to lower stocking rates. King Ranch began actively fighting this brush invasion in the early 1900’s. In fact, many of the mechanical methods of brush removal used today were developed on King Ranch.

However, from a wildlife standpoint, this brush encroachment increased habitat diversity and provided for a tremendous baseline food source during times of drought for a wide array of wildlife species. White-tailed deer especially benefitted from the spread of brush. 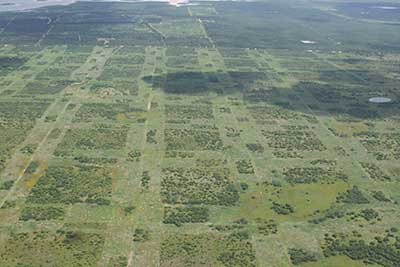 Robert Justus Kleberg, Jr. recognized as early as the 1940’s the economic value of wildlife and its reliance on brush. Thus, with the hiring of Val Lehmann, a systems approach to managing the brush, wildlife, and cattle was initiated.

GIS and GPS techniques are used to design the brush management patterns employed on each pasture. The targeted goal, following treatment, is for 65% of the pasture to be open grassland and 35% to remain in brush. This ratio should meet wildlife needs for concealment, browse, and edge, while also improving forage production for cattle.